Happy on my birthday

I spent the morning reading birthday messages (thank you) and talking to my mum on the phone, which nearly made me cry again until Matthews turned up with lovely presents and cake. We played a game that consisted of asking strangers what we should do next. The first directed us to a very lovely restaurant where I was treated to lunch. The second told us where to go for shopping, with great ice cream en route. The third told us where to go for a good coffee. We went out that night for food drink and then dare I say it ended up at Vivienne's. It was Dave’s last night and it was open late OK? And from now on, no more.

I was sorry to see Maz Matthews go but the lovely Diego complete with sweet tooth and DVD collection was a much needed landing pad, staying for three weeks in my little flat in La Paz.

When Matthews left it was the end of an era really, the back packing travelling era. Ever since then I have been a foreign journalist experiencing very different but equally brilliant adventures.

July in the capitals
I spent July getting ready to work and sorting myself out, pulling the stories I had already been working on together, researching new stories and giving Diego pep talks over red wine and chocolate.

There were a few big events mind you. A bit of drama over the lap top, which was eventually fixed and returned, after a bit of Kika kicking.

Then there was the march for the capital in La Paz. This is becoming one of the b iggest issues for Morales and his government, threatening to scupper the work of the Constituent Assembly, which was formed to come up with a new constitution. Bolivia has two capitals at the moment.
The legislative seat and therefore official capital is Sucre. But the Government sits in La Paz. Sucre used to be the capital, and historically it has always had a claim, if such a thing exists, to the capital. But La Paz is where everything is based, the ministries, the NGOs, the Embassies, and all of the businesses and individuals who life off that.

I hope I am not over stepping the mark by saying it would simply not be possible to move everything to Sucre, not least because of the enormous cost. It would be like moving London to Edinburgh. And really, a lot of the people, involved in this campaign know that. The issue was planted as one for the Constituent Assembly to deal with, despite the fact that it is a hugely sensitive issue that once caused civil war in Bolivia. Remember too that the Constituent Assembly is not like Parliament, it is made up of almost ordinary people, chosen by their various political groups or social movements as representatives.

People in La Paz were (and are) seriously worried and so two million of them took to the streets. There were marches that felt different to the norm. You loose track of who is marching and for what, and actually people power can be a bit of a pain in the arse. The stoppages can paralyse the city or at least slow things down, and companies have moved to other cities because it is such a barrier to their everyday business. But on this occasion, the city was unified.

We walked a long way through La Paz to El Alto and wherever we went it felt the same, there was an atmosphere of togetherness. As we neared El Alto we hopped onto a truck, and stood like cattle in the back trying not to fall over. There must have been a hundred people up there, with Diego and me the only foreigners.

In El Alto the make up of the march was humbler than in the centre, with people spilling down from the hills and carrying banners. I talked to people about why they were demonstrating and the answer always related to their children and their work. In Sucre it’s a different story. 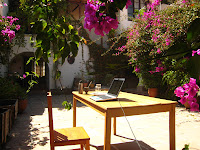 Sucre is where I am now, it having taken me two months to write this bloody update. I am staying at the house of a Dutch friend, Gert, who I got to know because of the laptop issue. I feel very lucky because the house is beautiful. It is colonial style with white walls and wooden staircase, that looks out onto an open court yard full of flowers, where I am now sitting at a wooden table, the sun on my back, eating sweet cucumber (a fruit they have here) and sipping yerba mate with a few coca leaves thrown in for good measure. Honestly I look like I should be writing a book on yoga or wholemeal sex or something.

I was really glad to get back to Sucre. It is a very manageable sized place and I quickly found out about a meeting of ten thousand indigenous campesinos a day after my arrival. It was then that I realised that this issue of the capitalia is serious. 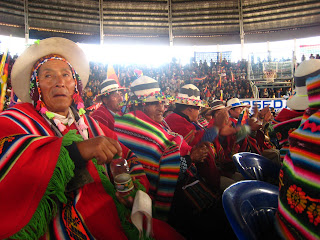 All these people, chewing coca, dressed in what to me looked like traditional dress but to them is everyday garb, in a massive sports stadium, all there to defend the Assembly and the Constitution. ‘They want to destroy our President, our Assembly, our Constitution.’ People shouted from the stage. ‘After 500 years of marginalisation, abuse, of not being included they want to deny us again but we will not let them’.

It was good to meet them and hear them because after that the stage was dominated by Morales’ critics in Sucre. He arrived to mark Independence Day, looking much less relaxed than the last time I saw him. Here those fighting for the Capitalia wear leather jackets and sunglasses. They are more middle class and very oh but very well organised. 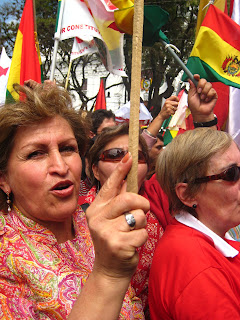 On Independence Day Morales asked that a banner be removed, a stupid mistake that resulted in a heavy hand police man hitting the person in question, who then made a run for it. The angry shouts got louder ‘we want the capital’ and ‘Evo is a dictator.’ They stood behind the barriers, some distance from where Morales was addressing the nation.
In the street a little television for the benefit of journalists, who were not allowed into the hall where Morales was speaking, crackled with the sound of him pleading for unity. I left early to catch a flight to Santa Cruz and on the radio, you could hear the people’s cries even as Morales spoke. 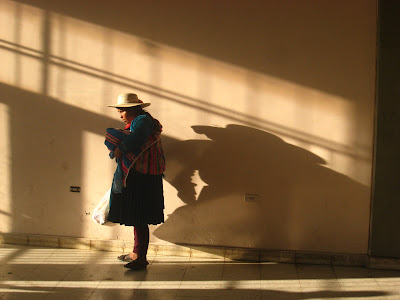