With our fortunes told and our lungs in need of some fresh air we headed to Rurrenabaque, aboa 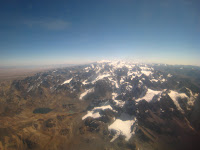 rd a little plane that looked like it had been put together with sticky tape. I felt nervous taking off from such a height but I soon got lost in the view. We passed the dusty brown planes of the pampas, came frighteningly close to snow capped mountains and saw lush green jungle in the distance. But when we stepped off the plane, it was proper warm air that greeted us.

Once a sleepy little village, Rurranabaque has been waking up to tourism and is now a jumping point for tours and trips, with companies promising monkeys and anacondas to try and win the tourists over.

First we were heading to Chalalan Eco lodge in the jungle. A friend of mine had recommended this place and it is international renowned for being beautiful and ethical; run and owned by the local Quechua Tacana community. Second, we were going to look up a Shaman that Dave Ford does earth (the American I met when my computer was assaulted in Sucre) had put me in touch with. We had heard from Dave, Susana and Ken about Ayahuasca, a jungle medicine used in shamanistic ceremonies to help people deal with their demons and let’s face it… we all have our demons right? Having read up about ayahuasca, we knew that the experience would be intense. Most people vomit and hallucinate and come to face to face with their insecurities. It has been used in treating people with addiction and mental health problems… though I am still waiting to hear what my dad has to say about it (he being a shrink as oppose to someone with mental health problems).

Like the rest I was prepared to put my life, or at least my mental health, in the hands of this Shaman for a few hours in an effort to be better. What I hadn’t realised was that I still had my cynical, defensive armour on, so when we arrived at the office, to see a short queue of tourists and be told that there had been an… err double booking with some evangelical Christians; I got a face on.

When you decide to experiment with something that is as far from your day to day reality as shamanistic rituals and ayahuasca, I guess being a bit distrustful is natural right? Or maybe I was just a judgemental bitch, but when I saw the tourists and listened to the two staff members, who were younger than me (how very dare they) and heard that they had double booked my mental well being (I am such a dick)… well I went into moody, cynical overdrive.

Maz and I headed back to the others and pronounced the whole thing a waste of time, clearly a tourist trap, bunch of jokers, disgrace to the pachamama. It was made worse when we saw the girl who had broken the double booking news to us and the shaman at the airport. He, Belgian, 25, with sun glasses too big for his face and a sort of floppy rock star hair cut, had been meant to perform our ceremony? Hah! A lucky escape I considered arrogantly.

I feel embarrassed owning up to all this now because that man, Tim, is one of the most astonishingly talented, gentle, brilliant people I have ever met. It is thanks only to journalistic curiosity - I still wanted to write about this ayahuasca thing - that I exchanged numbers with him and ended up on a retreat with him later.

In a little wooden boat we headed up stream with our guide, Sergio, a well mannered local who spoke today’s version of ‘learnt it from a book’ English, in other words he had learnt it from a CD. 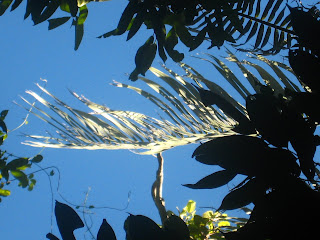 Along the banks we searched for signs of life. There are jaguar, puma, monkeys, tapier, wild pigs, macaws here but they’re all very good at not being seen. The water was a thick blue, rippling as our boat ploughed through the occasional rapids. All the way, Sergio feeding me inspiration, for a story on trouble in the jungle.

Madidi National Park is truly beautiful and at Chalalan they’ve got a very good thing going. The lodge was set up by the community of San Jose de Uchupiamonas, who have exchanged hunting and logging for sustainable tourism with the help of Conservation International. The village has benefited; some more than others maybe, and the lodge, which charges almost European prices, is turning over a very healthy profit.

National parks have always been controversial in Bolivia with many poorer farmers and people from the highlands questioning how much they benefit ordinary Bolivians. What they see is land that could be used for agriculture, and natural resources that haven’t yet been exploited.

As travellers, Chalalan probably wasn’t suited to us. We were greeted after nature trails with fresh papaya juice on a silver tray and ate three course meals at long tables in somewhat uncomfortable calm. But we did witness a tarantula on a night walk, swinging squirrel monkeys, the golden palace titi monkey, (named after a Canadian casino, whose owner bought the naming rights at a charity auction huh), macaws, butterflies and a baby Cayman in the reeds in the lake. 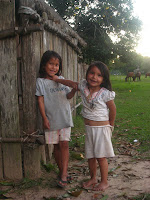 We visited Sergio’s village too, where people played music, cooked and danced for our enjoyment. At first I think we all felt a bit uncomfortable, but we saw it came from their interest in us and a desire to win our support in their fight to keep the park safe. 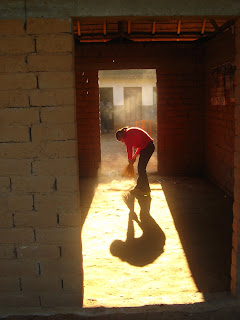 Sometimes as a tourist you want an organic experience but actually what you do is put expectations on realities without appreciating them for what they are…. Just like the shaman, who I had expected to be dark skinned with a long beard, people in this village wore jeans and were unsure why their day to day life was of interest to us. But it was a really interesting experience, people were very kind and it felt like a long way from anywhere I knew before.

I felt really relaxed at Chalalan. What I loved most was the noses of jungle frogs, so tiny but so loud and the roaring bark of the red howler monkeys as well as the flapping sounds of birds in the trees.

Luxury as we were to find out is a sweet complaint compared to the squalor of our pampas tour. We left direct for the pampas in a van that broke down three times along the dusty road. A journey that should have taken three hours took seven. Still this meant we travelled to the lodge in a little dugout canoe as the sun set; dream like. 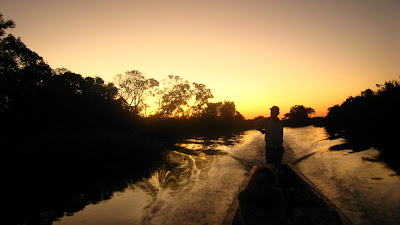 At the so called lodge, mosquito nets were tatty and tinged with graffiti and dead bugs and a mouse ran across one of the nets, when we came back after supper. But then, maybe that’s how it should be in the jungle right?

We headed out the next morning with our guide, a man somehow gangster like, who showed little regard for the environment and a total lack of enthusiasm when w 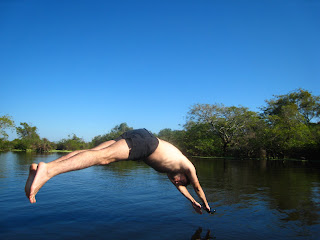 e asked about what we were seeing. He was quite the opposite of diligent little Sergio, but his job was much easier; you couldn’t miss the wildlife here.

We swam with pink dolphins in Parana infested waters which we later tried to catch on spikes (I failed predictably; too impatient), came within inches of a cayman , fed squirrel monkeys banana, spotted turtles and perching toucans and even stopped for beer. 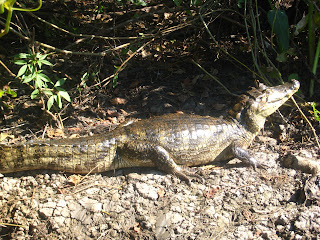 Dirty, smelly and half drunk, we headed back to Rurrenabaque. I haven’t mentioned them yet, but by this point the sand fly bites I’d acquired whilst crossing a river a few days before, at Madidi, were becoming intolerably itchy. I literally pulled up my trousers to cross the river and swarms of these tiny harmless looking bastard things attacked my legs and arms. I didn’t notice at first. Initially they come up as tiny blood red pricks. But later they began to swell and ooze nastiness. They looked like big red sores; I tried to count them and stopped after sixty. The worst thing about them is that they just don’t stop itching.

We returned to La Paz perhaps with heavy hearts. We probably had started to annoy each other by this stage, but still we had all become very close and were about to part company. Precious pretty P was going home to London after almost three months travelling with me. Roller disco had a fierce schedule to keep up with if she was going to make it to Costa Rica in time, and the Spaniard was headed for Colombia. Maz Matthews had decided to stay another week for my birthday (bless him).

It felt quite strange when we woke up, obviously after a heavy night again, and found they were gone.
Publicado por Kika Duvet en 10:36